The vast expanse of Juno Beach

Our trip to Juno Beach was a full, rich and slightly overwhelming one.  The beginning of our day at Juno Beach Centre can be read about here.

After leaving Juno Beach our guide Christophe spent the next 5 hours taking us from the west side of the beach (in Courseulles-dur-Mer) eastward, through Bernieres-sur-Mer and Saint-Aubin-sur Mer.    These three downs hold the majority of Juno Beach (which s I mentioned, is 7 km long).  Driving (and walking) up these beaches you see a few repeated patterns.  The first - memorials.  There are memorial plaques, stones, and flags at an unparalleled frequency.  Honouring different countries, regiments, and people.  Each one is similar, but yet different.  There was a moment where I found myself stopped wondering if these were just on repeat, or if they each had their own significance.  And each is unique - a testament to how many people fought, how many lives were lost, and how important this battle was to the future of the world (also known as our present).  There is the Canada house - the original house that was liberated in 1944, with names posted under it's front window.  There are bunkers, and anti-tank and anti-aircraft guns - still in the cement along the shoreline.  There are local restaurants with the bunkers still attached to it.  Tanks sit along side the street as a reminder, with plaques on them dedicated to various regiments and their impact they had on the invasion of Normandy. 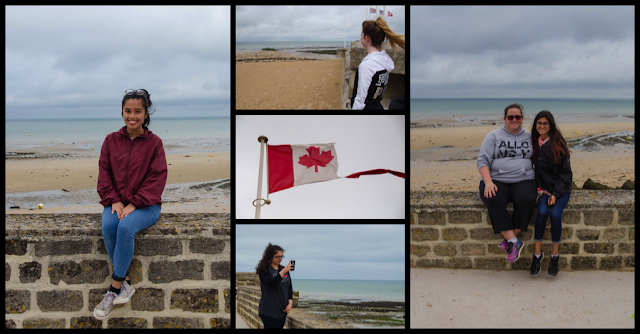 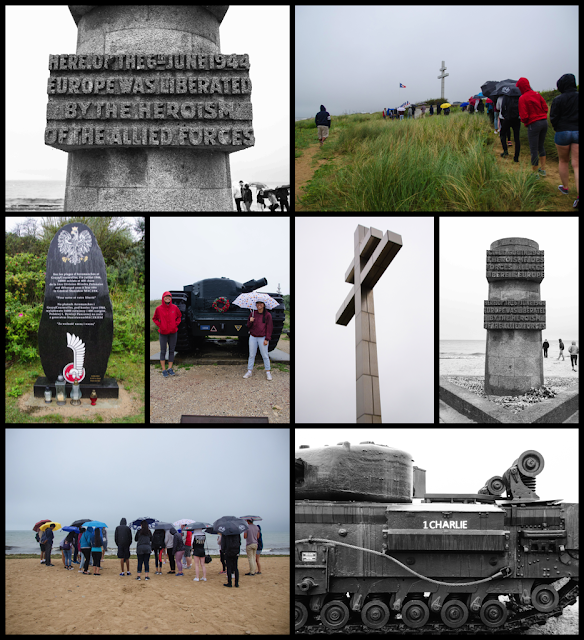 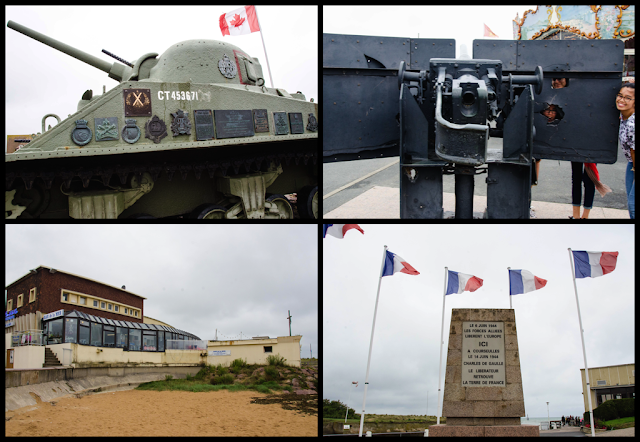 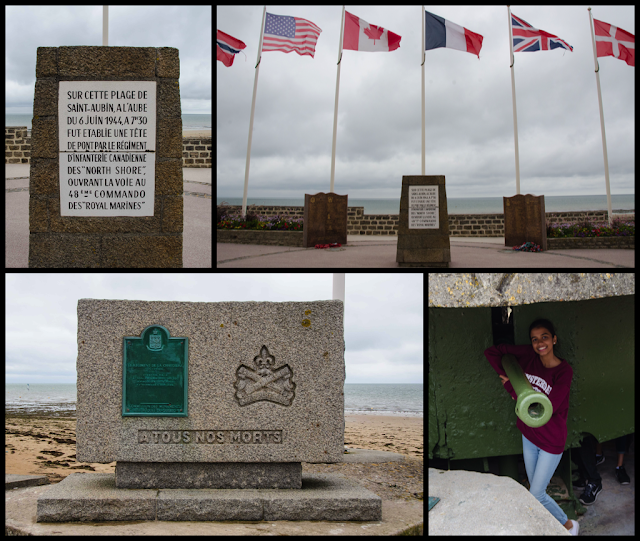 There was a moment along the beach where Mr. Becker, and shortly after, a group of our students, walked down to the water.  Placed their hands in the Atlantic.  As the group was leaving, Mr. Becker turned around and started running back up the beach to meet us.  When he got back he commented how hard to was to run up the beach.  And how much harder it must have been with 80 lbs on their backs.  Wet clothes and boots, thick military apparel, and of course, a gun in their hands.  "And then", he said to me, "I tried to imagine doing this while people were shooting at me." Trying to understand war is sometimes easier (and then again, harder) while being able to stand in someone else's shoes.  The is a large part of the reason we were here. 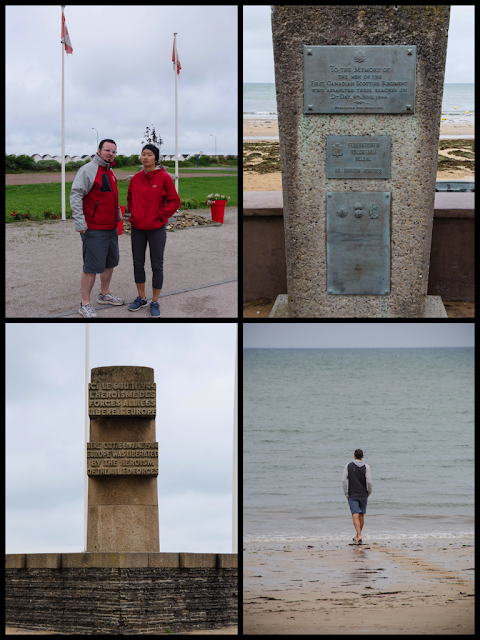 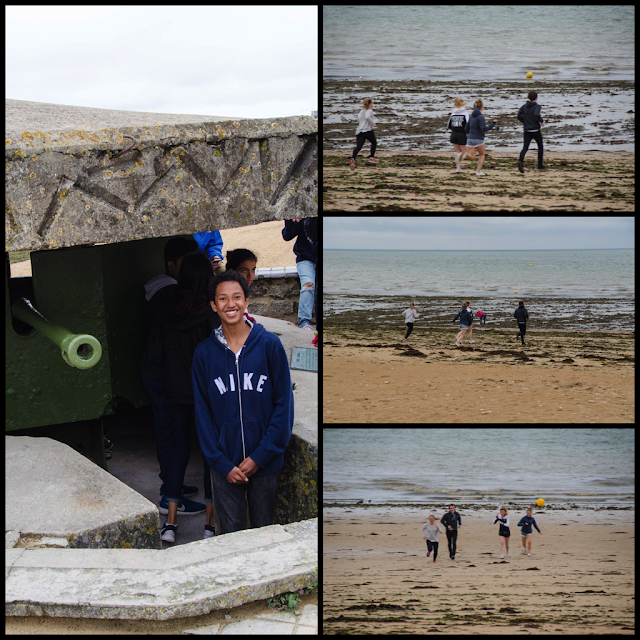 After we finished our time at the Beach we had one last stop - the Beny-sur-Mer Canadian War Cemetery.  Over 2000 Canadian soldiers who died here at the Battle of Normandy are burried here.  Some of the same monuments we learned about from Steve were here (as determined after WWI by the Commonwealth War Graves Commission) - the Cross of Sacrifice, and the monument with the phrase "Their Name Liveth for Evermore." 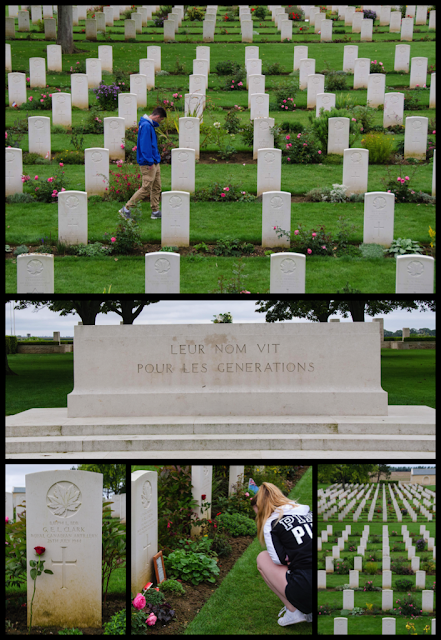 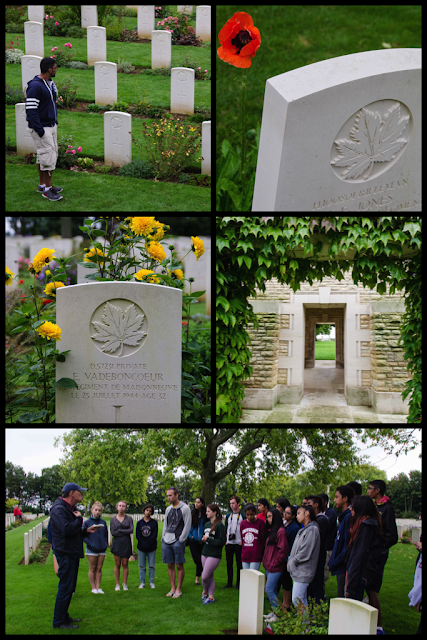 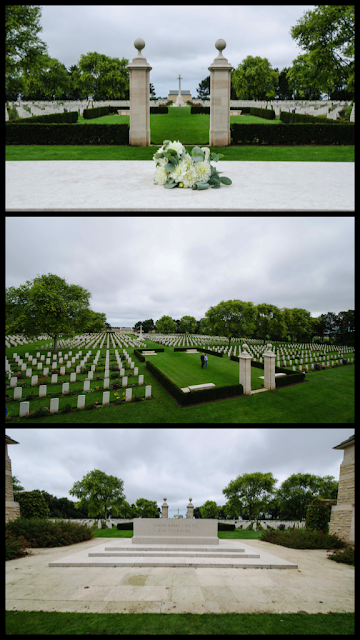 A lot of our students found this cemetery to be the most moving.  Opposed to the WWI cemeteries, the epitaphs found in this one were much more personal; this made them harder to read.  Lots of love for families, lots of sacrifice.  Honour.  Pride.  Courage.  And because of this, there were many more tears and aching hearts at the end of the day.  Some students walked around for almost an hour.  If we would have given them time to ready all 2048 headstones - many would have.  They wanted to understand.  And pay their respects.  And hear the stories.  If only we had time for them all.

And so our time in Normandy came to an end.  All too soon of course.  Until next time.

This travel blog details Mrs. Becker and her students on their various Sullivan Heights travel adventures.
"The world is a book and those who do not travel read only one page." Augustine